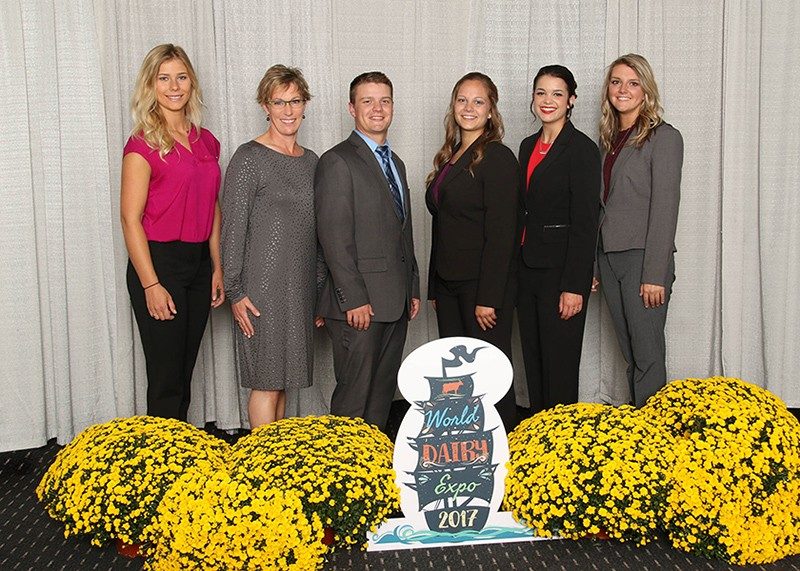 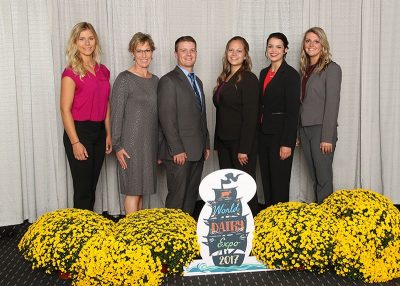 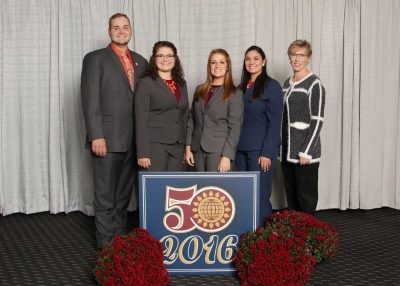 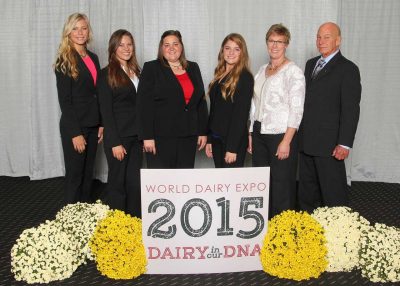 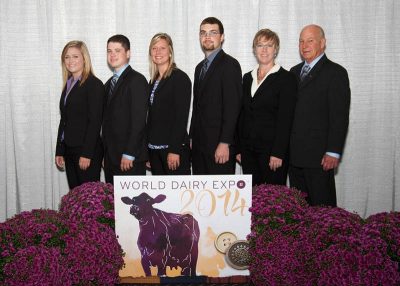 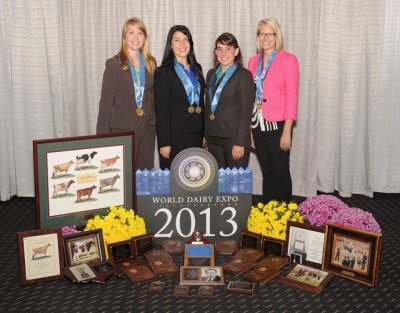 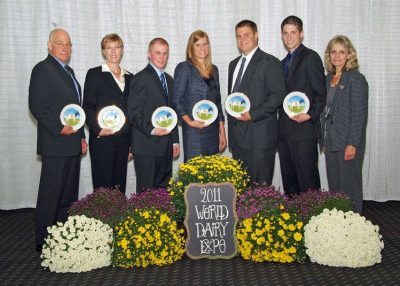 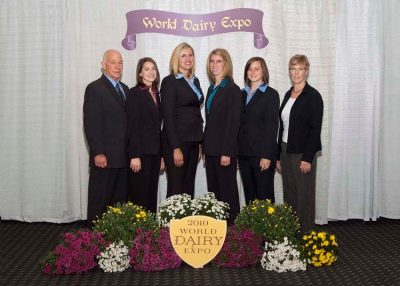 The 2018 Judging Team off to a great start in New England!

The season started off with both teams competing in the Eastern States contest in Massachusetts. Team A won High Team in Jerseys and in Oral Reasons, and was 4th overall. They were led by Katelyn Allen, 1st overall as well as 1st in Ayrshires, Milking Shorthorns, Jerseys, and Guernseys. Sarah was 2nd in reasons, Shelby 3rd, Katelyn 6th, and Kavita 8th. A team won Jerseys and was high team in oral reasons.

The Pennsylvania All American contest in Harrisburg PA was another successful day. Only the A team competed; they placed 1st overall. Also, they were 3rd in reasons and 1st in Ayrshires. This time Sarah Thomas was the star, winning high individual overall and placing 2nd in reasons and 1st in Brown Swiss. Shelby Iager also had a great day, winning Ayrshires and Holsteins, earning a perfect 50 on her Holstein reasons.
This year’s team ‘A’ members are Katelyn Allen from Jefferson, MD; Leah Hall from Riner, VA; Shelby Iager from Frederick, MD; and Sarah Thomas of Snow Camp, NC. B team is Will Boyd of Chesapeake, VA; Kavita Bushong of Lancaster, PA; Rachel Kanefsky from northern Virginia and Catherine Savage of Dickerson MD.The judging teams are coached by Dr. Katharine Knowlton, who was assisted this year by Kayla Umbel, a Dairy Science senior and member of the 2017 judging team.

Team members and coaches greatly appreciate the support of the Virginia State Dairyman’s Association, the Virginia Dairy Foundation, the Virginia Tech Dairy Club, and the many AI organization and alumni donors who provide financial support for this activity. We also thank VANC Select Sire Power for their generous donation of team-member recognition plaques each year. The team is also indebted to the many farms throughout the northeast, mid-Atlantic, southeast and Wisconsin who host judging practices throughout the year.

Additional highlights include Virginia Tech freshman Cassidy Schirmer, who is a member of the Maryland 4-H team. Maryland won  the National 4-H Dairy Judging Contest - with a one point margin of victory!

2011--A year to remember for the Virginia Tech Judging Team, capped off by an historic tie!

This is the fifth time in six years the team has placed in the top three of the national competition. In addition for their tie for first, Virginia Tech placed first in Ayrshires and first in Guernseys. Carissa placed third overall and eighth in reasons. Jason placed eighth overall, and Austin placed ninth. Each team member placed in the top 5 individually in at least one breed, and all four were named “All Americans” by virtue of placing in the top 25 for individual scores in the competition. The last time all four Virginia Tech team members were named All Americans was 1998!

The team’s success at Madison was built on their good work at two earlier contests. At the Eastern States competition in Massachusetts, both team A and team B completed, and it was the team B that came out on top, winning Holsteins and the overall title, while Team A was first in Milking Shorthorns, and first in reasons. Team B members are Kelsey Smith from Paris TN, Robert McGarry from Enosburg Falls VT, Ashley Martin from Gorham ME and Alex Patch from Lebanon NH. Kelsey was high individual in that contest; Ashley was 3rd overall and Cody Pearson placed 5th overall.

Harrisburg was the most challenging of the contests. Team A competed; Jason Zimmerman was high individual in Ayrshires and Carissa, Cody and Austin were each top 10 in one breed. The team placed 5th place in Holsteins, 5th in Reasons and 8th overall.

Virginia Tech Judging Team “B” will compete at the North American contest in Louisville, KY.

Team members and coaches greatly appreciate the support of the Virginia State Dairyman’s Association, the Virginia Dairy Foundation, the Virginia Tech Dairy Club, many the many AI organization and alumni donors who provide financial support for this activity. We also thank VANC Select Sire Power for their generous donation of team-member recognition plaques each year. The team is also indebted to the many farms throughout the northeast, mid-Atlantic, southeast and Wisconsin who host judging practices throughout the year.

“The real value of participating on a judging team is the gains in problem analysis and solving skills, as well as the teamwork, self-discipline, and communication skills that students experience. These skills and characteristics are highly valued by virtually all employers and quickly enable these students to progress into leadership positions.”
--Dr. Mike Barnes